Have you been out recently?

Shopping in the neighborhood, taking a walk while feeling the atmosphere of the seasons, inviting friends to eat, taking a short trip by car or train, taking a bus to the hospital… There is “pleasure” and a “purpose” for every outing. And that outing is always protected by a lot of “peace of mind.” However, if the anxiety becomes greater than the relief… You may lose the desire to go out.
One of the worries when going out is the problem of the restroom. For example, we don’t know if there is a restroom on the way to our destination. Or there is the potential that the found bathroom, after a long search, has a toilet that we don’t know how to use. With these anxieties, can you continue going out and feeling that relief?
Now, I would like to tell you about the “D Restrooms Project” that we have been working on with the people of Machida City, Tokyo.

The reason why the D Public Restrooms Project started was the words of Mr. H., a caregiver at the dementia café “Men’s Carers Café” held once a month at the “Kiso Anshin Counseling Room” in Machida City. “The hardest part of life with my wife, who got dementia at the age of 55, was the problem of public restrooms when going out. I had to go to the restroom with her because she couldn’t flush the water, but there were few multi-functional toilets. Even when finding one, going to the bathroom with my wife, who did not seem to have any problem or need long-term care, was a mental burden because of the glances of everyone around.”
Mr. K., who was also taking care of his wife, told us of his own experience, “Due to the number of times that my wife (who needs long-term care level 4) goes to the bathroom increasing, I didn’t want to go to the restroom with her, so we stopped going out, and stopped eating out. I don’t take my wife outside, except for the day service five days a week. We used to go to the sushi-go-round in my neighborhood, but now we don’t. When she doesn’t go to the day service, we spend the day at home, just the two of us, just waiting until the end.”

The beginning of D Restroom Project

Mr. Takeuchi, a staff member of the “Kiso Anshin Counseling Room” who witnessed the reality of the bathroom situation of people with dementia, consulted me, the administrator of the day service in the neighborhood, “Is there anything I can do?” There are bathrooms in both the counseling room and offices like the day service, and I thought, “If there is someone that understands, anyone can use the restroom with peace of mind. I want people to use the restrooms in the community when they go out.” I immediately asked the opinions of the local residents who attend the Anshin Counseling Room. I spoke to all the people who have dementia and difficulties reaching restrooms due to problems in their legs and hips. Everyone saw it as something to be concerned about. When we took questionnaires, we found that most people wanted public restrooms they could easily stop by. 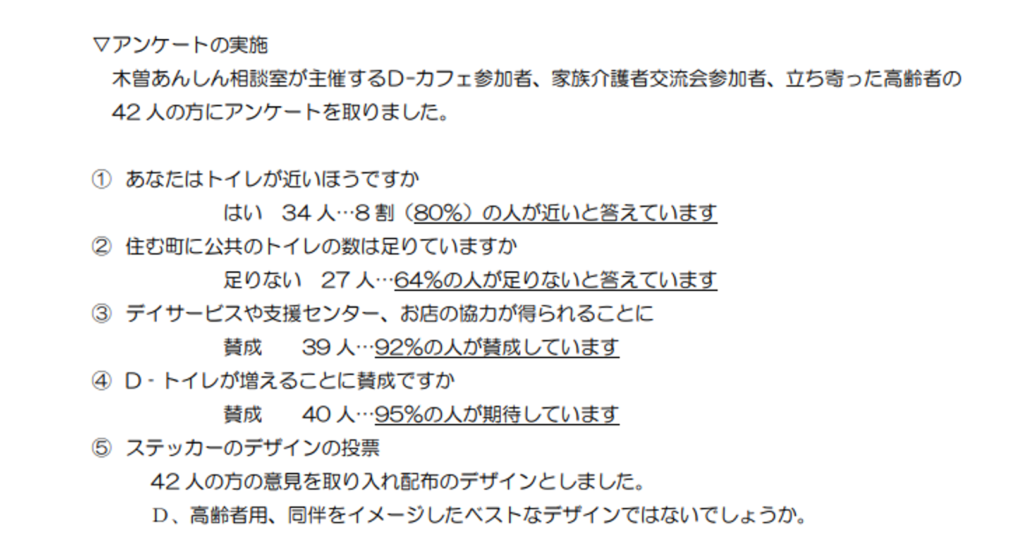 Previously, in Machida City, many activities related to dementia use the first letter of this word (D café, D Summit, D BOOKS, D sake, etcetera). We have decided to combine the letter D with the word restroom for this activity, making the “D Public Restrooms Project.” Furthermore, in this case, D includes more meanings in Japanese, like “to be accompanied (DOHAN),” “anyone (DAREDEMO) can enter,” and “find it anywhere (DOKO).” 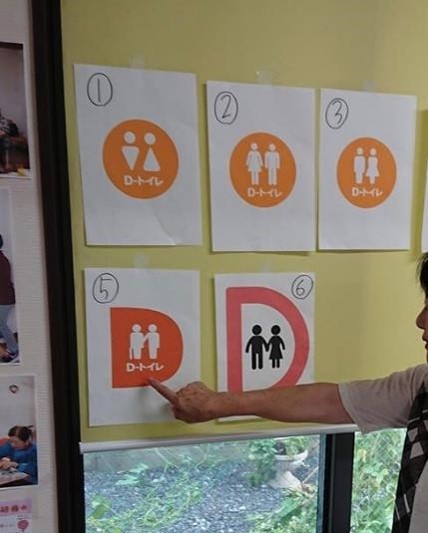 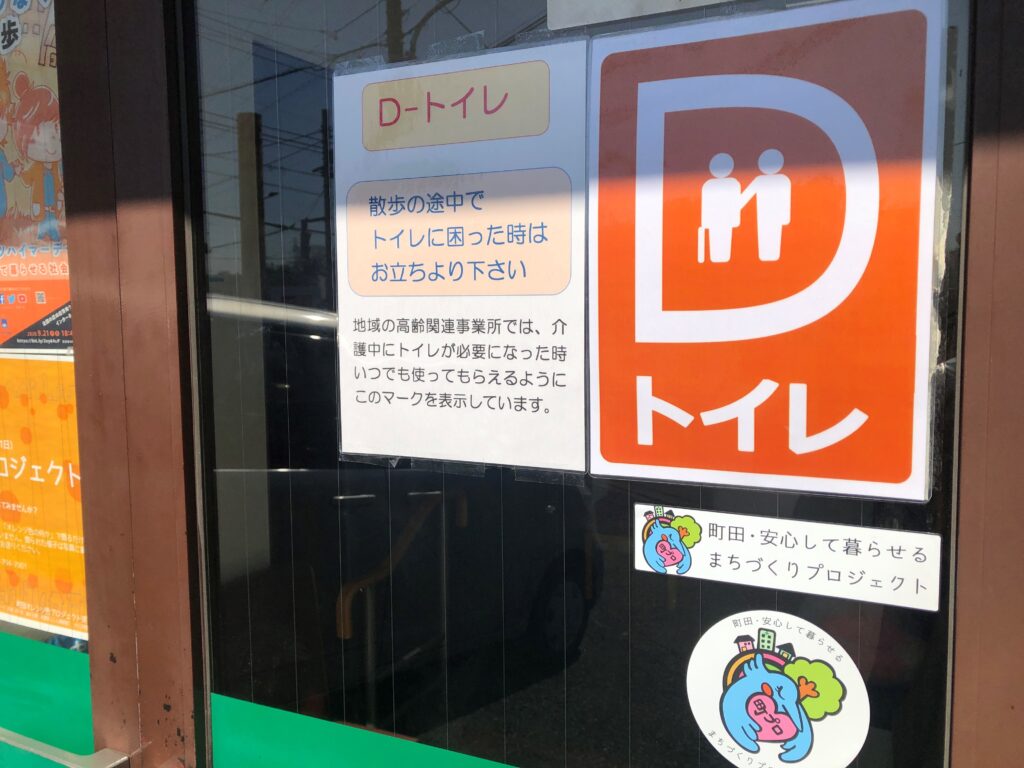 In order to know the restrooms available for use, we have put stickers outside in a visible spot. The design was perfectioned by people with dementia, who selected from many design proposals, conveyed their opinion, and made minor corrections. The phrase “D Public Restrooms” itself doesn’t transmit the meaning. For that reason, there is an explanation next to its name.

The expansion of D Public Restrooms, from now on 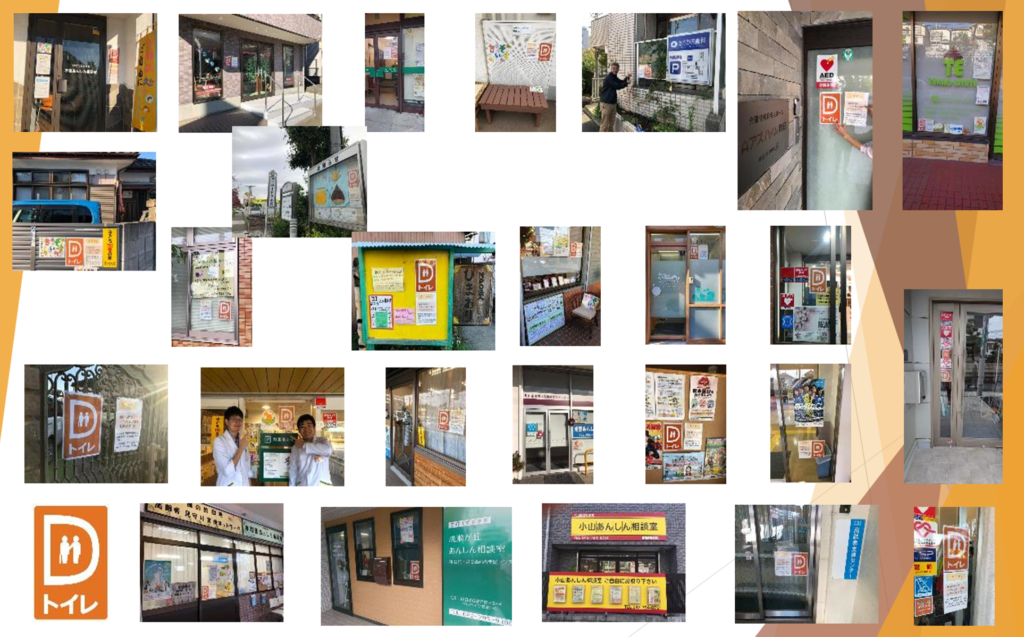 The D Public Restrooms Project doesn’t provide any rules regarding the function and scale of bathrooms and how the staff is involved. The concept of the activity is simple, “lend bathrooms to those in need.” To recruit sponsors, mainly Mr. Takeuchi and myself, we went to offices inside Machida City to ask for support, and we are also engaged in public relations activities like social media.
As a result, we set up about 50 D Public Restrooms in just the first three months alone. We received financial support from long-term facilities, hospitals, pharmacies, even real estate companies, and funeral homes. They agreed, “we want to deepen our relationship and connection with the community by lending and borrowing restrooms.”
After repeating activity reports and lectures at many events, we received many inquiries from other municipalities. Since no special preparations or costs are required, we will continue our public relations, hoping to spread the activities not only in Machida City but all over Japan.
Last but not least, we are aiming to “create peace of mind” by increasing the number of D Public Restrooms in the city. Would you like to join our efforts?

Supervisor of Five Star Ltd., “Otonari (Nearby) Day Service for Dementia.”
He takes care of his grandfather, who was diagnosed with dementia when Hikaru was a teenager. After hiring a long-term care worker, he gained experience in sales and copywriting, and became a day service manager at the age of 26. We are working with people with dementia in the community to create a town where individuals can play an active role regardless of whether they have dementia or not. The D Bathrooms Project, which he was involved with, received the New Wave Award from the “NHK Hearts & Arts, Grand Prize for Living with Dementia.”