Testing when you suspect dementia
If you suspect a loved one may have dementia, you can take them to the hospital for an examination and various tests.

A physician will ask about the symptoms the person is exhibiting, the time of their onset, other symptoms, any prescription drugs the person may be taking, and other medical information. Often the person in question will be unable to explain things in sufficient detail, so it’s a good idea for someone who’s familiar with the person’s daily life to go along.

A physician will check movement of the arms and legs, look for any muscle stiffness, etc.

A physician will verify the person’s memory, awareness of the time and date, ability to perform tasks in order, and other aspects of cognitive function.
People age 75 and over must undergo a cognitive function test when renewing their driver’s license.

Blood tests will be administered to check thyroid hormone, vitamins, and calcium in the blood, all of which can affect cognitive function.

5. Imaging of the head

Images of the morphology of the head will be taken using a CT or MRI machine to check for conditions such as cerebral infarctions, cerebral atrophy, hematoma, hydrocephalus, and tumors.
Some people are content to just undergo a head CT or MRI scan, but it’s important to have an interview and cognitive function test as well.
In addition to the head CT or MRI scan, some patients may be given a nuclear medicine test such as single-photon emission computed tomography (SPECT). 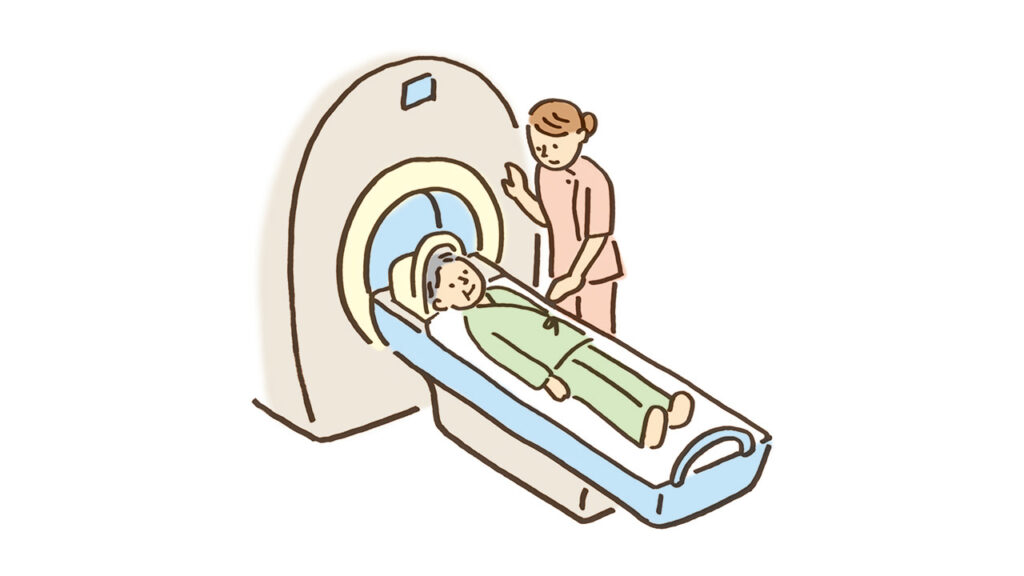 Symptoms that cause dementia

Dementia is not a single symptoms, but rather a condition that can be brought on by a number of different diseases. This page describes some of the most important of those diseases. For more information about the seriousness of dementia symptoms, see the “Progression of dementia” page.

This is the most common cause of dementia among the elderly. It’s believed to account for 60% to 70% of all dementia cases.
It often starts with forgetfulness (memory disorder) and gradually progresses over the course of a period of time ranging from several years to 10 or more years. It’s believed to be caused by clumps of minuscule proteins like β-amyloid and phosphorylated tau protein around nerves and in nerve cells in the brain. The proteins interfere with the working of the nerve cells and lead to cellular death. In a typical case, imaging of the head shows atrophy of areas such as the hippocampus (the inside of the temporal lobe), and the extent of this atrophy increases over time. When the condition occurs in someone who’s younger than 65, it’s known as early-onset Alzheimer dementia. The disease is named for the German psychiatrist who reported on it at the beginning of the 20th century.

Blockages in the blood vessels of the brain cause cerebral infarctions and cerebral embolisms as well as cerebral hemorrhaging if the blood vessels rupture. If cognitive function is affected by these diseases of the brain, the patient will be diagnosed with vascular dementia. Even if a patient experiences a cerebral infarction or cerebral hemorrhaging that leads to paralysis, impaired mobility, or impaired speech, that condition differs from vascular dementia if the event does not affect cognitive function. Insufficient treatment of high blood pressure, diabetes, and arrhythmia can predispose a patient to vascular dementia and hasten its progression, so it’s important to carefully manage those diseases.

This type of dementia accompanies Parkinsonian syndrome, whose symptoms include visual hallucinations that cause patients to see things that don’t exist, gait impairment, and hand tremors. Patients may also experience visual illusions that cause them to perceive the curtains next to a window as a person, or the pattern on a carpet as insects. The condition may also be accompanied by symptoms including frightening dreams known as REM sleep behavior disorder, speaking in a loud voice, and struggling in their sleep. The relative strength of each symptom varies by patient, and some patients may only experience visual hallucinations and delusions as prevalent symptoms. Adjustment of prescription dosages is important since these symptoms may be highly sensitive to neurological drugs. The disease is named for a German-born physician who was active during the first half of the 20th century.

Other diseases that can cause dementia symptoms

In addition to the three diseases described above, other types of dementia include frontotemporal dementia, which causes neurological impairment, primarily in the frontal cortex, and semantic dementia, which causes patients to have difficulty in understanding the meanings of words. There’s also a group of diseases known as treatable dementia. Conditions described in the section on blood testing such as hypothyroidism, vitamin B12 deficiency, and hypercalcemia can be treated by administering the hormone, vitamin, or other deficient substance. In addition to diseases such as these that can be treated via internal medicine, there are also conditions that can be treated via neurosurgery, including normal pressure hydrocephalus, a disease in which an excessive amount of cerebral fluid collects in the brain, and chronic subdural hematoma, which can occur two months after a blow to the head.